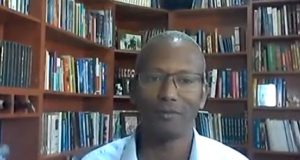 Tradition holds that on the 7th day after the Exodus, the Israelites escape comes to a halt as they encountered the impassable Red Sea.  The Torah notes that “Then They will Sing” and follows with the Song of the Sea, one of the most glorious examples of biblical poetry in which the recently freed slaves praise God for the miracles He has done for them.

Rabbi Shalom discusses the textual question raised by the medieval Jewish commentators (Rishonim), “When did the Israelites sing the Song of the Sea?”  The tense of the verse quoted above is ambiguous.  The word “Then” indicates that the Israelites sang before they crossed the waters but the phrase “They will sing” is indicative that they sang after they had already passed through.

Rabbi Shalom brings insight to this question drawing on his own personal experience as well as that of all of Ethiopian Jewry.  He noted that when he fled Ethiopia on his way to Israel, he came up against the impassable Sudanese desert. However, like his Israelite ancestors before him, he and his compatriots sang a song to God that was in part, prayer and in another, celebration.  Rabbi Shalom concluded that the in the same way, the Israelites must have begun singing before they crossed the Red Sea and continued singing during the entire passage.