The Second Ono-Columbia Conference – May 2008: Freedom of Expression and Corporate governance

At the end of May 2008, the second joint Conference of Ono Academic College and Columbia University was held, led by Prof. Zohar Goshen, Justice Khaled Kabub, Justice Ruth Ronen, academics, senior jurists and guests from abroad. The Second Ono-Columbia Conference – June 2009: Legal aspects of the fight against terrorism, the financial crisis and corporate governance.

At the beginning of June 2010, the second joint Columbia Conference of Ono Academic College and Columbia University was held, led by Prof. Zohar Goshen, Justice Khaled Kabub, Justice Ruth Ronen, Dean of the Faculties of Law of Columbia University of Virginia, leading jurists from the United States, New York State and more, as well as senior jurists in Israel.

The first day of the conference was dedicated to the topic: “The Legal Aspects of the War on Terror”, among the participants on this day: Dr. Amichai Cohen, Dr. Gabriel Halevi, Prof. Emanuel Gross, Dr. Daniel Taub, Prof. Dafna Barak Erez and many others. The fight against terrorism poses challenges to international law, while the traditional international law of war law has dealt with wars between two armies and two countries, the modern war is against terrorists, who are not organized in a normal military framework.

The second day of the conference dealt with the “economic crisis and corporate law.” Among the participants on this day: Prof. Zohar Goshen, Chairman of the Securities Authority, Prof. Paul J. Mahoney – Dean of the University of Virginia Law School, Prof. Assaf Hamdani, Prof. Reiner Krakman – of Harvard University and Dr. Leah Passerman-Jozefov And many more.

At the end of the second day of the conference, an interesting panel was held on the subject – “Economic Crisis and Financial Regulations”, with the participation of: Prof. Paul J. Mahoney – Dean of the University of Virginia, Prof. Prof. Reiner Krakman – Harvard University, Prof. Merritt Fox – Columbia University , And from Israel: Prof. Omri Yadlin – Tel Aviv University and Prof. Amir Licht. “The former chairman of the Securities Authority said at the conference that it is necessary to deal with infected transactions with controlling shareholders and that the gap between capital investment and control must be reduced.” A Snippet of the Conference Proceedings

Prof. Aryeh Babchuk, who served as an external advisor to the Centralization Committee headed by Haim Shani, participated yesterday in the sixth joint conference of the Ono Academic Campus with Columbia University. ” The second country in the world, after Colombia, at the level of complexity of its existing business pyramids – a level of complexity that is particularly noticeable compared to developed economies. “ A Snippet of the Conference Proceedings 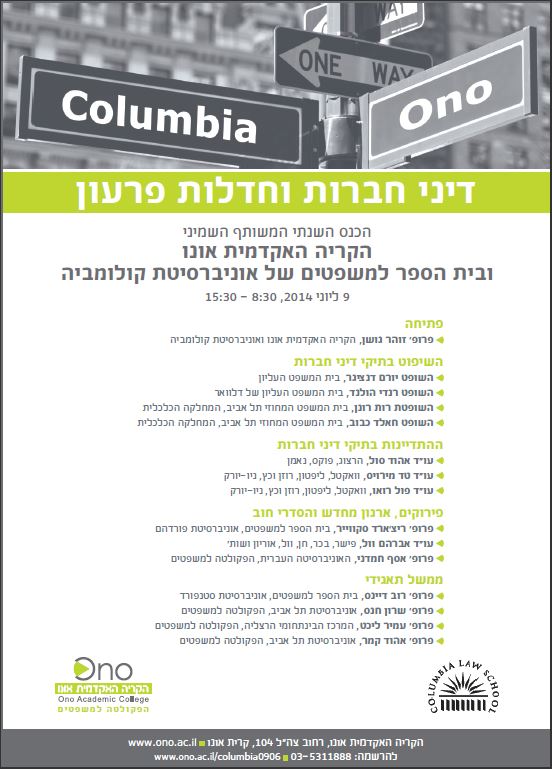 Snippet from the Conference Proceedings 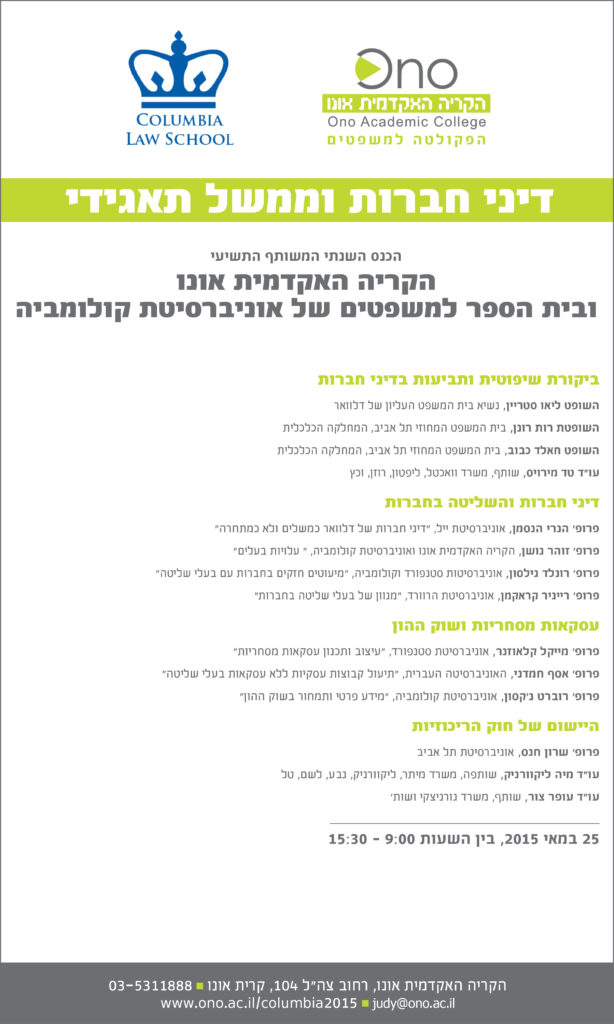 Snippet from the Conference Proceedings

At the end of June 2016, the 10th Joint Columbia Conference of Ono Academic College and Columbia University was held, led by Prof. Zohar Goshen, Justice Khaled Kabub, Justice Ruth Ronen, academics, senior jurists and guests from abroad. Prof. Zohar Goshen, one of the leaders of the Columbia Conference and a lecturer at the Ono Academic Campus, said at the conference that: “The conference reflects the enormous development in Israeli law as a result of the establishment of the Economic Court. I have no doubt that this process will continue and place the Israeli legal system in the field of company law on the world front. ” Judge Khaled Kabub, a judge in the Economic Department of the Tel Aviv District Court, said at the conference: Recently, two settlement agreements were brought for approval in class actions and they concern Clal Industries and HOT both concern private mergers between the company and the controlling shareholders. The public shareholders argued against the terms of the deal and the manner in which the proceeds were distributed. The significant difference between these two cases was that in the case of Clal Industries, the right to a fair trial was proved almost flawlessly, by establishing an independent committee that received dozens of meeting documents, negotiating with controlling shareholders, consulting experts and more.

That is, the parties to the transaction in question, have prepared themselves for the situation in which a third party will attempt to argue against the proceeding. At the same time, although the committee met the legal requirements for approving the merger, it should be noted that in some cases and in an exceptional manner, this does not disqualify judicial intervention. “

Judge Kabub also referred to his decision in the HOT case: “In the case of HOT, however, which was brought before me, significant flaws were discovered in the approval process of the external committee. For example – the composition of the committee included the chairman of the board, and thus the committee was not really an independent committee, when its meetings took place in the presence of board members from the controlling shareholders, the assistants were not independent experts, there was no proper negotiation procedure. When deciding on the level of judicial review to examine the materials presented to me, the actions taken by the company to ensure fair procedure and proper negotiations will affect the scope of the court’s intervention. ” Photo gallery from the conference >> Judge Grosskopf, one of the conference lecturers, said that: Financial lenders have the best access to information about controlling shareholders who acquire companies in leveraged deals. The remarks were made as part of a lecture that focused on a new ruling handed down by him in recent days in one of the appendices to the Peled-Givoni affair. In this affair, in the early 2000s, a group of businessmen took over eight public companies, the most prominent of which was Feuchtwanger Industries. The takeover was carried out through large-scale credit from the banks. “I do not know how the banks gave them credit on such a scale,” the judge said.

Justice Khaled Kabub, a judge of the Tel Aviv Economic Court, addressed the conference on all business discretion in Israeli law and its official adoption by the Supreme Court – in the ruling that approved Shaul Alovich’s leveraged takeover. The ruling upheld the practice of leveraged takeover whereby a buyer can take out large loans to buy control of the company. According to Kabov, the court must allow such takeovers in Israel because of the problem of centralization that characterizes the economy.

Judge Ruth Ronen of the Economic Court pointed to a trend of limiting the power of the controlling shareholders in Israel. She referred to her ruling in a derivative lawsuit filed following the payment of compensation from Idan Ofer’s private pocket to senior members of the Israel Company. Ronen approved the lawsuit, after ruling that a private payment out of the pocket of a controlling shareholder that was not approved as part of the company’s compensation policy violates the rights of the minority shareholders who approved the compensation policy.