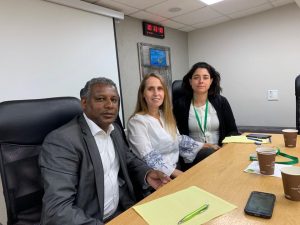 Adv. Zeev Kaso, the Director of the Program for the Advancement and Integration of Ethiopian-Israeli Students at Ono Academic College, was recently profiled in News Netanya.  Kaso (47), married and a father of four, discussed his life and career.

Kaso immigrated to Israel at the age of 11 from Ethiopia in 1984 during Operation Moshe. His family moved to the absorption center in Safed and he graduated from the national-religious Meron yeshiva high school.  He served in the IDF as a newspaper reporter for the BaMachaneh journal, and then moved to Netanya, where he resides today.

Adv. Kaso described his successful absorption which he credits in large part to his family and his participation in a youth movement.  He noted, “My struggle today is so that children will be integrated into all the youth movements in the country because they are the place for true integration, values, giving, love of country and leadership.”

He holds a bachelor’s and master’s degree in Law from Ono Academic College and today serves as a Lecturer at the Law School.  About 19 years ago he founded the Program for the Advancement and Integration of Ethiopian-Israeli Students at Ono Academic College  Kaso said, “The Program is causing a real change amongst young men and women of Ethiopian descent by allowing them to acquire higher education in prestigious fields, which enables optimal integration in the public and private labor markets, while at the same time developing personal and social leadership skills.”

Kaso added, “At Ono Academic College, there are a number of [sector-based] programs, for instance, a program for the ultra-Orthodox population, a program for the Arab population and a program for Ethiopian-Israelis. Those accepted into the Ethiopian program receive significant scholarships and personal accompaniment and mentoring by the program’s staff and the head of the program from the date of their admission until the end of their studies. Students also receive academic support including group and individual tutoring sessions given by teaching assistants, who are students in the Outstanding Scholars Program.”

The Program for the Advancement and Integration of Ethiopian-Israeli Students has about 1,000 male and female graduates of Bachelors and Masters Programs who have found employment in the Israeli job market. Among the graduates of the program are: Minister of Absorption MK Pnina Temano Shata; former MK Shlomo Molla; CPA Amir Gethon, Chief Accountant in the Ministry of Tourism, who a graduate in business administration specializing in Finance; Meir Assras, VP of Investments, Long Term Savings/Investment Funds and Severance Funds for Bank Leumi employees; Adv. and Police Superintendent Michael Bidegalin, Tel Aviv District Police Prosecutor, as wella as many other distinguished figures in business and public life.

One of the important aims of the program is the development of social leadership which the graduates are encouraged to find practical outlet for after they finish their studies. Kaso said, “This is their real test. In addition, the faculty at the School of Law and the School of Business Administration are concerned and actively work to find prestigious jobs and internships for the students that serve as springboards for them into the job market. At the conclusion of their studies, Ono Academic College helps the program graduates find positions at leading offices and companies in their fields of study, both in the public and the private sector. In this way, the program graduates found jobs as Clerks in the court system and employees in the State Attorney’s Office, banks, government ministries, government companies, the legal departments in municipalities and government ministries, and in the most prestigious law and accounting firms in Israel.

President’s Program for the Erasure of Teens’ Criminal Records

Another program to which Kaso devotes considerable time in his job at Ono is the President’s Program for the Erasure of Teens’ Criminal Records. He helps in preparing the submission of petitions to delete the criminal records of youth in general and young members of the Ethiopian-Israeli community in particular. In 2018, in a ceremony that took place during the Ethiopian Sigd holiday, the President of Israel, Reuven Rivlin, and the (former) Minister of Justice, Ayelet Shaked publicized a special call to Ethiopian youth to apply to have criminal records expunged in cases that could be closed with a classification of “Lack of Guilt”.

Kaso says, “It is very important for me to clarify that there is no such thing as deleting a criminal record if a person is convicted or if a case is closed due to lack of evidence. In such circumstances the record will never be deleted.  This term “deletion” is not exact in a legal context.  However, if a case lacks evidence, an application can be submitted to the Appeals Department of the State Attorney’s Office for a change in the recorded cause of closing the case from “lack of evidence” to “lack of guilt.” If the application is accepted, only then is the criminal record deleted.  This program allows the criminal record to be hidden from certain bodies that do not require this information.  However, for security bodies, all the information is forever visible and available.”

Following the invitation by Israel’s President and Justice Minister, Kaso helped organized a conference on the subject at Ono Academic College with the participation of the former Director General of the Ministry of Justice, Adv. Ami Palmor and representatives of legal clinics from across the country.

“Almost everyone at the conference expressed concern about the program’s effective outcome because it doesn’t provide a a solution to the real problems facing Ethiopian teens,” said Kaso.  “This is because most of the offenses recorded for the youth are a result of over-policing are not within the purview of the program. When I speak about “over-policing” I am using the words of Israel’s national Police Commissioner, who himself admitted that this was going on. In addition, legal clinic managers held a meeting on the subject with the legal counsel of the President of the State and expressed their concern about the program. They worried that if the program wasn’t extended to cover minor instances of assault on a police officer as part of an over-policing event, it would likely cause disappointment among the youth.”

Kaso added, “I think the criteria should be expanded because in general, the issue is one of minor offenses. Out of the 20 youth with criminal records in Netanya, only four were included in the criteria of the program outlined by the President. “

In conclusion, Kaso noted that a new legal clinic is going to be opened in Netanya. Kaso said, “I certainly welcome this initiative. The clinic will serve the population of Netanya and provide legal assistance in civil matters.  I hope it will also help as much as it can with counseling on criminal matters as well. “