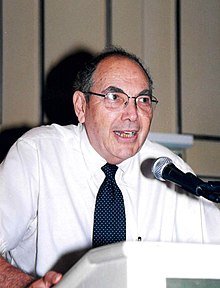 Prof. Marshall Sarnat, z”l, (August 1, 1929 – July 19, 2006) was an Israeli researcher and educator in the field of finance .  He was the founding Dean of Ono Academic College’s School of Business Administration.

Marshall Sarnat was born on August 1, 1929, in Chicago, Illinois, United States. Sarnat was the son of Maurice and Dena (Lewe) Sarnatzky. In 1950, he immigrated to Israel. Marshall Sarnat has been listed as a noteworthy Finance educator by Marquis Who’s Who. Sarnat married Carmela Shainker on January 17, 1956.  Their children are Don and Tamar.

Sarnat began his academic career as an instructor in the years 1959-65 at the Hebrew University of Jerusalem.  He was promoted to the rank of Lecturer in 1965 and Senior Lecturer, 1967-72. Sarnat became an associate professor in 1972 and a full professor of finance in 1976. [1] He was appointed as a senior research fellow at the International Institute of Management, Berlin, where he worked from 1975-1977.  Sarnat continued to work at the Hebrew University until 1995. In 1995, Sarnat was appointed as the Dean of the Israel Academic Center’s Faculty of Business administration.

Sarnat served as the editor of Journal of Banking and Finance, since 1978.

In the academic field, Sarnat was one of the pioneers in researching the allocation of resources in financial markets, which are characterized by uncertainty.[2] Together with his colleague Prof. Haim Levy he wrote one of the basic books in the field. Sarnat was in favor of free market action, but thought that when there were banks with too much market power a failure was created, and the only way to overcome it was through government intervention.[3]

Marshall Sarnat has published over 131 works in 370 journals in 5 languages[5], with over 40 peer-reviewed scientific articles.[6][7]