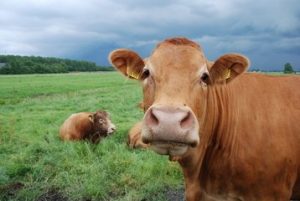 Rabbi Sharon Shalom, the Director of the International Center for the Study of Ethiopian Jewry at Ono Academic College,  noted that in the weeks before the Passover holiday, Jews around the world read a special portion of the Torah dealing with the ritual of the Red Heifer, a cow which is completely covered in red hair and whose ashes are used to purify those who have come in contact with the dead.  In the times of the mobile Tabernacle and the Temple in Jerusalem, it was important to purify one’s self before Passover because this was a requirement for offering the Paschal lamb sacrifice.

Rabbi Sharon explains that the Red Heifer ritual is considered by Sages to be the most obscure subject in the Torah. The ashes of the red cow succeed in purifying man from the impurity of death and at the same time the ashes defile the person who is already in a state of ritual purity. King Solomon, who tried to understand the reasoning behind this commandment, did not succeed. What then is he point of this puzzling mitzvah?

According to Maimonides, there were only nine red heifers throughout history. The first was sacrificed by Moses, the second by Ezra, and another seven were made between the time of Ezra until the destruction of the first Temple in Jerusalem. Maimonides holds that the Messiah will prepare the next Red Heifer, at the end of days.

The laws of impurity and purity were strictly observed by Ethiopian Jews. In the Talmudic tradition, these laws probably ended in the time of the Sages. The ritual of the Red Heifer was preserved by the Samaritans until the 14th century, according to some scholars. The Beta Israel community of Ethiopia is the only one of the world’s Jewish communities that continued to use red heifer ash to create a solution to remove impurity (according to Dr. Yossi Ziv). This custom ceased in the 1970s because of the dangers surrounding the Ethiopian civil war that was ongoing, as well as a lack of completely red cows. The last red cow was slaughtered in 1952 by the priest Mamhara Yishak (according to Adv. Gonchal Ya’akov). While the commandment is no longer practices, the observance of the mitzvah of the red cow by Ethiopian Jews throughout the generations and until even very recently can shed light on a possible explanation of the educational-social significance of the mitzvah and offer a possible solution to this age-old mystery.

The halakhic [Jewish Law] way of thinking is a Jewish version the paradigm of classical Greek thought, which underlies the paradox of our modern times. It seems to me, therefore, that both halakhah and modernity are anchored in linear thinking, of cause and effect. This thinking creates a world in which there are no apparent doubts. However, reality is not like that. As a Jew of Ethiopian descent, who studies Beta-Israel Jewish heritage, I believe that the Ethiopian Jewish tradition offers a significant alternative: non-linear and even chaotic thinking. It offers the opportunity to live in doubt but with great faith. King Solomon was the wisest of all men, but with his linear thinking he failed to understand the chaotic idea that the commandment of the red cow was born to teach us – the limitations of the mind. God teaches us in this mitzvah that we must recognize the fact that we cannot understand everything. Moreover, the practices of impurity and purity contributed significantly to brotherhood and peace in the home. Adherence to the customs of impurity and purity in Ethiopia facilitated positive human relations, and did not lead to acrimony and division as we read of its effects in the Second Temple period. Is the preservation of Red Heifer matzah by Ethiopian Jews the reason for the modesty, humility and submission that exist in Ethiopian culture? Or is this culture the reason for the preservation of the chaotic mitzvah by them until their immigration to Israel? This is indeed an interesting question.

Finally, it is important for me to describe the traditional way of thinking of Ethiopian Jewry. Ethiopian Jewish heritage is centered on the present: statements such as “one day…” or “never-ever…” do not exist in the discourse. Now is the time -to listen, to watch, and to enjoy! Therefore today – and not tomorrow – we must tell our family and those who share our environment how much we truly love them, both with our deeds as well as with our words. We sometimes refrain from doing so because of our ego and the thought that we know everything and the belief that we are guaranteed to live up to 120.  I write the last sentence – which I see as a halakhic ruling of the heart – out of my sadness derived from the fact that missed out on so much, following death of my mother who passed at a young age: I wish we were privileged to adopt these foundations of traditional belief that in many ways is opposed by the modern spirit.