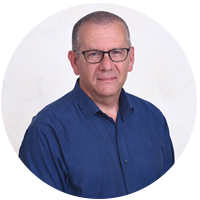 Maj. Gen. (ret.) Alon Levavi serves as the Head of Specialization, National and Organizational Resilience in the Master’s Degree in Business Administration.

Levavi is the Founder and CEO of Next-Now (ltd) – Strategic consulting and entrepreneurship.

Levavi served as a combat helicopter pilot in the Israel Air Force and later served in the Israel National Police for a total of 34 years in a variety of senior management and command positions. He ended his service with the police in 2019 as Deputy Commissioner. Among other duties, he served as chief of operations, chief of policing, district deputy, police spokesman, police sub-district commander, and police station commander.